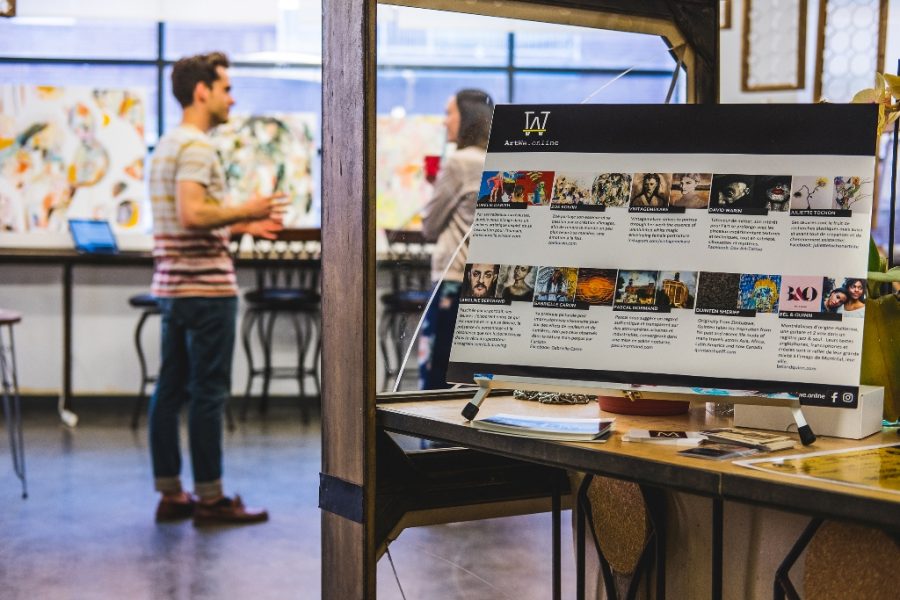 ArtWe was born on June 16th, 2018. This venture was made possible thanks to the efforts of nine artists from the Montréal art scene who liked the concept and decided to become involved by exhibiting their artwork for the launching event.

Aurélie Darish is a young Montréaler who loved painting from age one. After high school and CEGEP studies in the art field, her passion for painting remains intact, and her artistic evolution is reflected in each of her works.

Through her surrealist paintings, Aurélie plunges us into an artistic universe inspired by her fascination for humankind.

We invite you to discover her surrealist universe and visit her website.

Caroline, a Montréaler artist, works primarily in drawing and enjoys experimenting with the various visual possibilities offered by charcoal, pastel or graphite and their interactions with different mediums.

Fascinated by portraits, her artwork is an elaboration between what is shown and what is guessed, between the presence of the character and the resonance that his story finds in the spectator’s experience.

With the series Portrait/Remix she has exhibited during the event, she works around contemporary portraits where the energy is exploded in a material witness, a gesture released.

Originally from Granby, Zoé moved to Montréal in 2000 to develop her artistic fiber.
After an academic career in graphic design and communications, Zoé began a career in the media field where she developed her artistic sight, and set the foundation for her approach and her creative sensitivity.

Inspired by the great artists of her generation, many of whom she met during her various work experiences, Zoé connects to her vision and shares her essence and passion through the creation of images. Her goal is to make the world a little more beautiful, one emotion at a time.

Discover her colorful canvases full of movement and optimism on her website.

Born in Quebec City in 1983, Gabrielle holds a Bachelor’s degree in Visual Arts from Laval University. She also studied for a semester in France at the Beaux-Arts of Nantes.

During her stay in France she discovered the Conceptual Art & Language type of art, which greatly influenced her thinking and her career.

Involved in the visual arts community of Montréal, Gabrielle’s post-graduate work focuses mainly on painting, but she also performs visual and symbolic performances.

Her artistic style can be associated with a visionary post-impressionism.

She works from the effects of colors and lights but instead of transposing the light observed in nature, she tries to translate the light she perceives emanating from objects, people and scenes. It is the potential healing power of colors and symbols that interests her. Her touch is also different from Impressionists and consists of an accumulation of small wave lines.

She tries to create art that makes sense and brings harmony through a particular energy. Her subjects vary greatly from one series to another, but the Beauty of Nature and Culture is the common inspiration for all of it.

For Juliette, art is, above all, a way of exploring and better knowing one’s inner and outer world. It is the way she translates her beliefs and her existential journey.

In this sense, she enjoys using different symbols and speaking about her evolution and her learning in consciousness.

Her visual personality has a tinge of perfectionism, and it is this preference for harmony and perfection that gave birth to her refined style, symbolic and mental.

Her artwork, therefore, is the fruit of her plastic research…but also, and above all, the result of her beliefs and inner journey.

Have a look at her Facebook page to learn more about her art.

Vintage Mekare is a Russian-Armenian multidisciplinary artist based in Montréal. Her work is heavily inspired by the desert, native traditions, folk impressions, past lives and narratives of the wilderness.

She strives to portray through her work the essence of uninhibited white magic enveloping female portraiture. She specializes herself in traditional mediums such as pencils and oil painting as well as weaving and bead work.

French, and nomadic in his soul, it was after a travel stint that David eventually dropped his suitcases in Quebec at the beginning of the 2000s.

His interest for the arts first crystallized at the Faculty of Arts, Picardie. It continued through the tattoo, a millennium medium, which became his job.

Without neglecting the epidermis, it was a decade later that he allowed himself be tempted by the paintbrush. Experiencing textures and techniques, his preference is the acrylic paint that he uses for monochrome paintings.

It is thus, in the premises of this new passion, that he completed his first artwork on canvas, and created silhouetted images that can be associated with sobriety and mystery…

Have a look at David’s facebook page to get to know more about his art.

Originally from Zimbabwe, Quinten takes his inspiration from his past and recent life made of many travels across Asia, Africa, Latin America and now Canada.

Quinten defines himself as an adventurous ambitious explorer of the world. He previously taught Music and English in Peru, Thailand, China, South Africa and he has exhibited his art in every country he has lived in.

Have a look at the great artworks of this friendly and cosmopolitan artist on his website.

Based in Montréal, in the Hochelaga-Maisonneuve neighborhood, Pascal Normand is a visual artist who works with photography, digital technologies, and aerosol paint.

He provides us with an authentic and transparent view of urban and industrial atmospheres at night.

Awarded many times for the originality of his works and his artistic approach, Pascal Normand introduces to another vision of what surrounds us, and brings to the center our interests, identity issues, and the collective memory.

You write articles related to art and you want to be published? Contact us